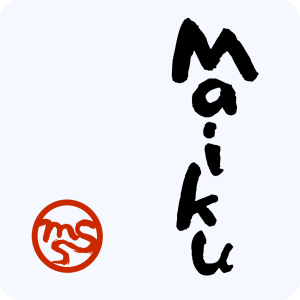 Maiku
a Haiku composer for your iPhone®

From texts to tweets to restaurant reviews to email, so much of our modern written expression has been reduced to terse bursts. Wouldn't it be nice if there were a creative medium for this tendency? Seventeenth century Japanese Haiku poets were way ahead of their time.

Inspired by the brevity and charm of the Haiku poem, Maiku is a minimalist poetry composer and journal that helps you stop, create, and share your own 17 syllable marvels, in a form that seems made for today.

Haiku is a simple form of poetry that originated in Japan hundreds of years ago. Loosely following a brief, three-verse, seventeen "breath" structure, the Haiku form was employed to consider and distill the splendor of the natural world. Here is an example from master Kobayashi Issa (1763-1828):

The wren
Earns his living
Noiselessly.

In the early 20th century, Haiku found a foothold in the English-speaking world and has since been embraced by poets and school children alike. Among the early adopters, Ezra Pound discovered the power of Haiku's syllabic limitations in his poem, "In a station of the Metro":

The apparition of these faces in the crowd;
Petals on a wet, black bough.

Here's another poem from modern American poet Sonia Sanchez, the first in a series she wrote about drummer Max Roach:

Nothing ends
every blade of grass
remembering your sound

Few things are better for the mind than constraints and writing. Haiku offers both.

Maiku's jumping off point is the classic three-line, five-seven-five syllable structure. But that's just a place to start; you'll find that the app gives you the freedom to compose your verses as you please, with as many or few syllables as you like.

Simple Composer
No clutter. Only the essentials. We count the syllables so you don't have to.
Journal
Keep track of your poems over time. Document your thoughts and observations in Haiku.
Sharing is Easy
Image or text.

What will you say with 17 syllables?

Maiku is available on the App Store for Free.